Canned Tomatoes & Are They Good For You? | Amoils.com 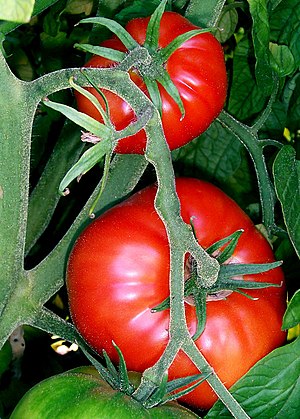 (Photo credit: Wikipedia)[/caption] Well of course tomatoes are extremely good for you but canned tomatoes? That is a different story.

A few words about fresh tomatoes

Fresh tomatoes have a great flavor and, when you add in their cancer-fighting properties and numerous other health benefits, it is no wonder that they are the second most popular veggie in the USA. Unlike the situation where vegetables and fruit served raw have more health benefits than cooked, Lycopene is unique because it is best absorbed from cooked or processed tomatoes. And that includes canned tomatoes.

So back to the question about canned tomatoes and being good for you?

We want to think so because there are so many uses for canned tomatoes in cooking and they provide a great standby in the pantry. Cooked tomatoes (such as in tomato sauce or tomato paste) not only increases the lycopene content that can be absorbed by your body, but also increases the total antioxidant activity. But the can of tomatoes has been declared as one the “7 foods even safety experts won’t eat”. This is because the resin linings of cans contain BPA (or Bisphenol-A) a synthetic estrogen that has been linked to undesirable conditions ranging from reproductive problems to heart disease, diabetes and obesity. Because of the acidity in tomatoes, the level of leaching can be even higher in canned tomatoes than other canned food. Studies have shown than the BPA levels in the majority of people now exceeds the amount that (a) can suppress sperm production and (b) cause chromosomal damage to the eggs of animals.

So what can you do to avoid these cans?

One final suggestion is to consume your tomatoes, whether raw or cooked, with some type of fat such as olive oil, grass fed butter or coconut oil. This is because lycopene is a fat-soluble nutrient.   Sources: https://www.naturalnews.com/010310_tomatoes_healthy_lycopene.html#ixzz2cKg3kyVF https://articles.mercola.com/sites/articles/archive/2012/09/08/bpa-narrowed-arteries.aspx https://www.amoils.com/health-blog/a-safer-way-to-enjoy-canned-tomatoes-2/