Echinacea Is Proving To Be A Very Versatile Herb | Amoils.com 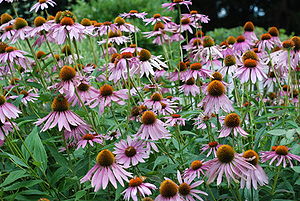 A very popular herb worldwide is Echinacea or the purple cone flower. It is a tall perennial plant, flowering in summer to early autumn. The roots, rhizomes and parts above ground are all used in herbal preparations. Chinese wisdom declares that the root is most powerful before the flower appears as the energy at this time is in the root.

Not only the root

All the different parts of the plant are used fresh or dried to make teas, squeezed juice, extracts or preparations for external use. Recent ground breaking research by a group of internationally-reputed, independent researchers has shown, for the first time, the efficacy of Echinacea purpurea or purple coneflower against clinically important influenza viruses, including the new influenza pathogens - H1N1 or swine flu. “The increasing acceptance of herbal medicinal plants for the treatment of a variety of ailments is reflected in the increase in research activity and in the increasing number of scientific publications on phytotherapy,” says Estie Schreiber, marketing director of SA Natural Products and distributor of the ‘Echinaforce’ range in South Africa. According to recent research, Echinacea (marketed as Echinaforce) effectively blocked the replication of various influenza strains, like seasonal types as well as the pandemic bird-flu and swine-flu virus. Even after repeated treatment cycles the Echinacea fresh-plant extract exhibited persistent activity and no resistance was built up unlike the pharmaceutical product Oseltamivir (better known as Tamiflu).

A host of prospects for new medical applications for Echinacea

“Flu virus infections are a major threat to human welfare and animal health worldwide.” Estie continued: “The recent laboratory (in vitro) study was set up to test the effectiveness of an Echinacea fresh plant extract’s ability to block the replication of relevant respiratory tract pathogens." These research results are particularly important because not all Echinacea is the same. A product comprising 5% root and 95% flower was found to be the most effective combination and the good results suggest taking a closer look at the antiviral effect versus influenza viruses, giving particular consideration to the H1N1 strain. “It has long been thought that Echinacea may have direct antiviral effects” Estie also said:”but there was no conclusive evidence. The results of the latest research findings were unequivocal.”

Back to the history of this herb

Echinacea was used by North American Plains Indians, perhaps more than most other plants, for various herbal remedies. Echinacea was one of the basic antimicrobial herbs of eclectic medicine in the mid 1800s through the early 1900s and its use was documented for snakebite and anthrax. In the 1930s, "Echinacea" became popular in both Europe and America as an herbal medicine. A well known product made from Echinacea is Echinacea Tincture which, between 1919 and 1920, became the most widely sold and used medical preparation in America. It would have continued with its success story if the American Medical Association (which was a very powerful political organization) had not driven 20 000 practicing herbalists out of business. A good tincture will use not only the root, but the seeds and leaves and stems of a mature plant too. Echinacea Tincture is highly recommended for any immune system dysfunction and cancer to be used for 2 weeks, then a break for two weeks and then used again for another 2 weeks and to continue in that fashion.

There are many benefits of Echinacea

Echinacea has immune stimulant properties plus antimicrobial and anti-inflammatory properties: • It is used internally for skin diseases, fungal infections, septicemia, slow-healing wounds, chronic fatigue syndrome, venereal diseases and early stages of coughs and colds. • It is most effective for infections of the respiratory and urinary systems. • It stimulates the immune system to inhibit viruses and bacteria to enter and take over cells. It is used to bolster the immune system in cases of HIV/AIDS. • It is used externally to treat acne, psoriasis, dry and cracked skins and infected injuries. • It is used as a gargle for sore throats. • It is used for treating wounds, ulcers and other skin inflammations.

There are some Echinacea side effects

• When taken by mouth, while there are not usually any Echinacea side effects, some people can experience allergic reactions. Such reactions include rashes, asthma attacks and even anaphylaxis, which worryingly is a life-threatening allergic reaction. Apart from allergic reactions, the most likely side effects are gastrointestinal. • There are certain people who are more likely to suffer Echinacea side effects. These include those who are allergic to related plants in the daisy family (ragweed, chrysanthemums, marigolds and daisies) plus those with asthma or atopy (a genetic tendency to have allergic reactions). • You should never mix Echinacea with the herb called goldenseal as this can be a dangerous combination. To be safe, it is best to discuss your medical history and any medications you take with your medical practitioner before starting with any of the Echinacea herbal products.