A Natural Solution for Moles Moles are unbelievably common with everyone having at least one while some of us will have as many as forty moles on our bodies.  Of course it can all depend on where the moles appear as to whether we put up with them or not.

It is the moles that we are born with (just one per cent) that may cause issues in time, meaning that many of those with moles will consider having them removed.

Unlike the congenital moles mentioned above, the majority of moles actually develop during our lifetimes.

What do we mean by a mole?

The different ways to tackle moles

The following are different ways that are carried out by a medical or surgical professional: Monitor your moles for changes

It is very important to monitor your moles for any changes and immediately consult a doctor or dermatologist if you are concerned.

Such a diagnosis should be done early as moles are often confused with warts and skin tags.

Look for any changes in size, shape or color or if a mole starts to bleed, to itch or becomes painful.

In spite of all the anti-sunlight propaganda, exposure to sunlight (particularly UVB) helps to give protection as the vitamin D, that your body constantly produces in response to UVB radiation from sunlight, is protective.

There is a natural alternative for moles

And this natural product is H-Moles Formula.  Once any moles have been checked by your doctor, H-Moles Formula can be used safely and gently at home.  The process requires daily applications and comes with full instructions.  Patience is key to give the formula time to do its work. A tip to speed up the process

Another natural tip to remember is to raise your vitamin D levels (a) through sun exposure or (b) with vitamin D3 supplements.  Exposure to the sun to as much bare skin as possible during the hours of 10 am and 2 pm until the skin starts to turn pink (usually a maximum of twenty minutes) will mean your skin synthesizes vitamin D3 sulfate.

This form of vitamin D is water-soluble and can travel freely in your bloodstream.  During the winter months, vitamin D3 supplementation from a reliable source is a useful back up as well as a top up if you have been found to be vitamin D deficient.

Go all natural with H-Moles Formula 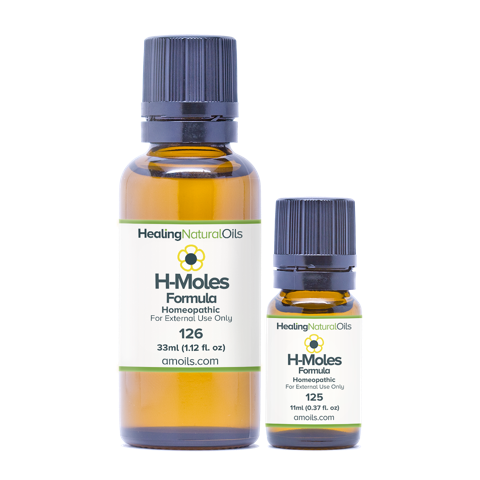 What does a mole look like? National Cancer Institute. http://www.cancer.gov/cancertopics/prevention/skin/molephotos. (Accessed, Feb 13, 2021).