Add This Whole Grain Quinoa to Your List of Superfoods | Amoils.com 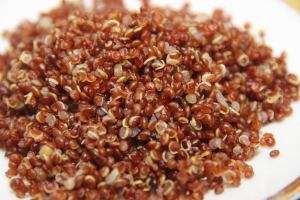 With all the hype about gluten intolerance, and the number of people who probably should be eating a gluten-free diet, here is one whole grain that is safe to use and tastes good too. Quinoa (which should be pronounced keen-wah and not quin-oa as you would suppose) has a nutty, grainy taste and, apart from being gluten-free, is high in iron and fiber which many of us tend to be deficient in. Simple to cook like rice, quinoa looks a bit like couscous but is more substantial and slightly crunchy.

A basic recipe for cooking quinoa

To this basic recipe, you can

A staple of the ancient Incas, who revered it as a sacred food, quinoa is actually a seed rather than a grain and related to spinach and Swiss chard. Quinoa has been one of the primary foods of the Inca Indians for more than five thousand years who refer to it as “Mother Grain”. While most quinoa is grown in the Andes in South America, some is now being grown in the Colorado Rockies. Many people are unaware of the fact that quinoa will grow in extremely poor soil making it (together with its great nutritional value) a true super grain to feed the world.

Although the most common color is white, it also comes in a red and a black variety. You can buy quinoa puffed, rolled into flakes or whole.

Don’t forget to include quinoa on your shopping list for a new and healthy eating experience.