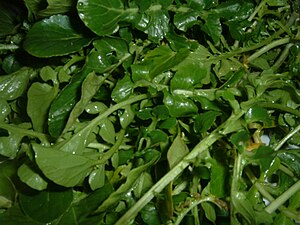 I was going to write a blog about all the good things in both watercress and watermelon but then I found there were so many benefits that each warranted their own page.

So here goes with the watercress first!

Watercress has only recently come back into favor – for years it was best known as a filling for sandwiches – dainty watercress sandwiches being very popular in England as part of a teatime spread. But now many realize how nutritious this herb is and how it can be used in so many ways to benefit our health.

They use them in salads and dressings, herb butters and spreads, sandwiches, soups, and casseroles and watercress is often featured on the menu in top restaurants.

Watercress is a member of the cabbage family

This family includes other greens such as mustard greens, kale, kohlrabi and turnip greens All of these provide an excellent source of vitamins B1, B2,B6, C, E, manganese and carotenes as well as fiber, iron, copper and calcium. These cabbage family greens have 3 times as much calcium as phosphorus making this a very beneficial ratio in preventing osteoporosis by increasing the utilization of calcium and preventing its excretion. Rich in mineral salts as well as vitamins C, A, B2, D and E, in the past watercress was used, not only as a scurvy preventative and remedy, but as a springtime tonic and appetite stimulant. In nature, watercress is a perennial plant which thrives in cold water, found in ditches and streams everywhere and is commercially cultivated for its leaves. It is easy to grow yourself from seed but of course loves plenty of water – it can literally sit in it. So if you are lucky enough to have a stream flowing through your garden (natural or man-made) here is the ultimate crop to grow in it wherever the water is from 2 to 6 inches deep. If not, you can simply plant it in a tub filled with sand and water. You can even grow watercress in clay pots, placed in a tray of water, making sure to change the water every day to keep it fresh and clear. Easy to propagate, watercress likes a mixture of rich alluvial soil, ground rocks such as river sand or limestone, and peat or humus. Below the water's surface, watercress sends out many fine white roots. Any section of the plant stem with roots on it will take hold and begin a new patch when anchored in a suitable environment. So it will spread if you give it the means. Watercress should be harvested before it flowers in summer.

Watercress has been used through the centuries as a natural remedy

How to make a watercress tea

Steep 1 tablespoon chopped fresh watercress in 1 cup boiling water for 20 minutes, then strain and drink. Fresh juice can be easily obtained from an electric juicer, but should be combined with some carrot or tomato juice before drinking.

How to choose and buy watercress

If you are buying watercress for the first time, look for fresh-looking greens with spring leaves that do not show signs of wilting and yellowing. Place the watercress leaves in a large plastic bag and store them in the refrigerator. This helps to keep the leaves fresh for 2 to 3 days. You can add watercress to cooked dishes, salads, soup, stews and stir-fries, just before serving. Use watercress as a garnish on vegetables or with fresh fruit such as paw paw or pineapple. Or just eat the green leaves raw or in that old fashioned way as a filling in sandwiches. Here is a great sounding, easy and very healthy recipe from Rachael Ray.

Combine watercress, mint, parsley and romaine in a small salad bowl. Combine lime juice and sugar in a small dressing bowl. Whisk oil into lime juice in a slow stream. Pour dressing over the salad and season with salt and pepper, to your taste. Enjoy!