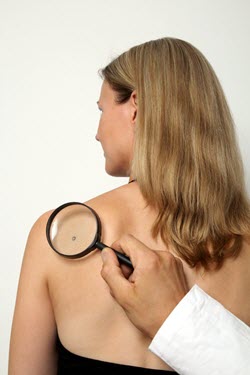 What is a Mole?

Moles are normally brown or dark spots in the skin and they can be flat or raised. Many people go through life without giving their moles a second thought while other people would prefer to get rid of any moles or at least some of them if possible. Sun exposure seems to play a role in the development of moles and may even be involved in the development of atypical, or dysplastic, moles. The role of heredity is important as many families have a type of mole known as dysplastic which can be associated with a higher frequency of melanoma or skin cancer.

Moles must be one of the most common conditions in the world as most everyone has at least one, while some have up to 40 or more, so it stands to reason that many people will be looking for a mole removal product or treatment. While most moles develop during our lifetime, 1% of people are born with moles and it is these congenital moles that might cause problems and even become cancerous in time so that skin mole removal becomes very important.

Examining your skin regularly can help to detect any suspicious moles early. It is much better to be on the safe side. While most moles are benign and normal and do not give any cause for concern, sometimes suspicious moles become apparent and these are the ones that have the potential to turn into melanoma and should be checked by a medical professional.

Common moles are usually small (less than a quarter of an inch in diameter) with well defined borders and they are all one color, whether pink or brown or anything in between.

If you are wondering how to get rid of moles, listed below you will find the various options for mole removal:

There are many natural treatments that have been reportedly used down through the years as ways to get rid of skin moles symptoms. We cannot vouch for nor endorse their effectiveness. Some of these are:

The most important thing to remember about moles is that you should monitor them for any changes and immediately consult a doctor or dermatologist if you are concerned. It is important to make this diagnosis early since moles are often confused with warts and skin tags. The changes you should look out for are in size, shape or color as well as if a mole starts to bleed, to itch, becomes painful or moles that suddenly appear in adulthood.

Although both moles, skin tags and sun spots appear on the skin in various parts of the body, they are quite different and usually easily recognized as definitely being either moles or skin tags.

Moles are usually small (less than a ¼ inch in diameter) with well-defined symmetrical borders and mostly a single shade of color throughout the mole ranging from pink to dark brown. Everyone has at least one mole on their body but most have many more and some have two or three types of moles. Some people are born with moles while other moles appear over time.

Skin tags are little pieces of oddly shaped thick skin which hang off different parts of the body. Some skin tags have a stalk or peduncle. The most common place for skin tags is the eyelids and around the eye, but they can also appear under the arms, on the neck and on your back. If there is one skin tag, then are often many others. Skin tags can bleed because they have their own blood supply. Fortunately, skin tags are benign so there are no health risks.

When you compare moles to sunspots, you will find that they have one worrying similarity. In both skin conditions, there is a risk of them developing into skin cancer. Skin cancer is a disease in which malignant cancer cells are found in the outer layers of the skin. Skin cancer is the most common type of cancer in the US, affecting more than 1 million people each year.

The Link Between Moles and Melanoma

Always keep an eye on your moles and see a doctor or dermatologist if you notice that a mole changes size, shape or color; if a mole bleeds or becomes itchy or painful; or if moles suddenly appear after the age of twenty. A suspicious mole can be a sign of the presence of melanoma.

Meanwhile it has been found that the rising rates of melanoma - documented over the last three decades - are not due to sun exposure as often stated but rather (according to researchers) due to an increase in diagnosis of non-cancerous lesions classified, misleadingly, as “stage 1 melanoma” and therefore actually not melanoma at all. In spite of all the anti-sunlight propaganda, exposure to sunlight (particularly UVB) is protective against melanoma as the vitamin D, that your body constantly produces in response to UVB radiation from sunlight, is protective.

If you can optimize your vitamin D levels through proper sun exposure, you can reduce your risk of skin cancer and as many as 16 other different types of cancer. The very best source of vitamin D is exposure to the sun because when you expose your skin to sunshine, your skin synthesizes vitamin D3 sulfate. This form of vitamin D is water-soluble and can travel freely in your bloodstream, unlike oral vitamin D3 supplements. However, vitamin D3 supplementation is a useful back up in times of cold winter weather and as a top up if you have been found to be vitamin D deficient.

Other guides on skin conditions: